A Tribute to Rhoda Segur 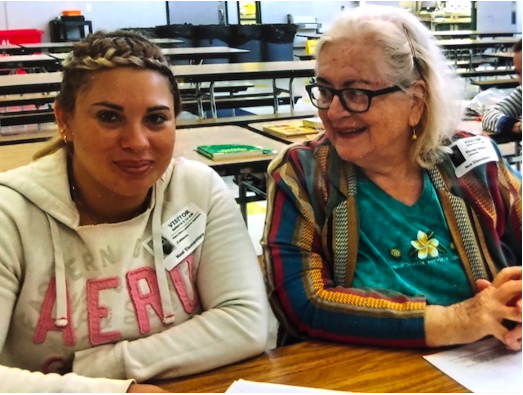 A Tribute to Rhoda Segur

When Rhoda Segur passed away on August 3, 2021, BIIN — along with other organizations and people — lost a remarkable advocate and friend.  We take this opportunity to recall some of the skills and sensitivities that made Rhoda Segur such a tremendous asset to BIIN over the years.

To understand what Rhoda brought to BIIN, it’s helpful to know more about her background and experiences before she became a BIIN volunteer and supporter.  Rhoda Danielle Segur was born in 1940 in Denver, Colorado.  While attending college at Pennsylvania State University in the late 1950s, she met and eventually married Charles Stover Fletcher, Jr., who was training to be an archeologist. In 1959, the young couple went to Mexico, where in various places over the years both of them taught, worked and built connections with local communities. Their three children — Cris, Leah and Daniel — were born during these years, and Rhoda remained in Mexico long after her marriage with Charles Fletcher ended.

Besides earning a BA in Sociology and Anthropology from Penn State and a MA in Linguistics and Spanish from SUNY-Buffalo, Rhoda taught English and Spanish at several institutions, including the Instituto Ovalle Monday in Mexico City and the Instituto Mexicano Norteamericano de Relaciones Culturales. The experience of living, traveling and working in Spanish-speaking cultures in Mexico, Central and South America for the better part of 25 years deeply impacted Rhoda for the rest of her life.

In 1984, Rhoda returned to the United States for good, and came to live in the Bryan/College Station area.  For over twenty years, she taught Spanish at the Bryan and Brenham campuses of Blinn College. Her former colleagues Susan Dennis and Antonio Caraballo, both now members of the BIIN board of directors, shared photos (below) of gatherings that brought Blinn faculty together, remembering how Rhoda’s presence enriched them.  Former Blinn colleague Mary Lorenzo also recalled Rhoda’s deep generosity:

Rhoda was the kind of person that the world direly needs now. She was compassionate and empathetic. She was always willing to help everyone. This included the poor and immigrants.  She also helped me on multiple occasions:  for example, one time Rhoda substituted for me at Blinn College for more than a month so that I could go to California to help my son and his family during a difficult time.

From her years of living in Latin America, her connections at Blinn College and her sensitivity to the needs of others, it is not surprising that Rhoda Segur became involved with Brazos Interfaith Immigration Network, shortly after the organization was founded in 2010. Clotilde Pichon, one of BIIN’s founding members, remembers how Rhoda first got involved with the IRA program:

Rhoda joined BIIN as one of the first volunteers in early summer 2011. She started as an IRA volunteer and for a few months she was one of the four team leaders for IRA. The IRA team leader was in charge of opening and locking Casa Juan Diego [at Santa Teresa Catholic Church] and supervising the IRA volunteers twice a month. Then the IRA organization evolved, and eventually, a part-time coordinator was hired.

Clotilde described Rhoda’s numerous skills as a volunteer in this way:

Rhoda never really liked to be a leader and preferred to be working in the background, as a “hands on” volunteer.

Rhoda was a real people person. She had great ability to connect with any immigrant, to listen to their stories, to have empathy for their situation, and when appropriate she gave guidance and advice. She was also an excellent teacher and more than once spent time teaching English to a kid, youth or adult, when there was a need and opportunity at IRA.

She was an IRA volunteer up to the beginning of the pandemic [in 2020]. She never liked to be scheduled, but showed up regularly and ready to help. She could be called upon to accompany immigrants to serve as an interpreter, which was really helpful since most IRA volunteers worked and were not necessarily available during the day.

Rhoda’s language and interpersonal skills and her willingness to serve as an interpreter to people in difficult situations made her a tremendous asset to the IRA program and also to other organizations serving immigrant neighbors in need.  Angelita Garcia-Alonso, who helped launch BIIN and works with the Parish Social Ministry at Santa Teresa Catholic Church, had this to say:

In the last few years, I would call Rhoda whenever I had a case of a woman in a domestic crisis who needed to consult with an attorney, or a law enforcement officer or even a family law judge, and needed an interpreter.

Rhoda not only served as an interpreter but she was very sensitive to the situation the woman was in. She would immediately put the woman at ease by speaking in her soft caring manner and looking at the woman with a caring smile, reassuring her. Rhoda gave of her time and her knowledge but more importantly, she made the woman who was scared and nervous feel that things would be alright no matter what happened. As an interpreter, Rhoda truly was a godsend.

These skills — the capacity to listen, to empathize, and to put a vulnerable person at ease — while also moving deftly between parties speaking different languages, are part of what made Rhoda such a valuable volunteer.  As Clotilde Pichon observed:

As an IRA volunteer, what you do [is like] an iceberg: there is a part that is visible, and a part that is invisible.  You can never know exactly what the effect of listening, of trying to help, has on an immigrant. However, most people who have been helped [think] about someone who took time to listen to them and how important that was. So Rhoda has probably helped many more immigrants than we will ever know.

Rhoda’s desire to connect with and help immigrants in the B/CS area was so deep that she also volunteered with other BIIN programs.  Nancy Plankey-Videla, another long-time volunteer and founding member of BIIN, remembered Rhoda’s promptness to step up to help:

She was always there. There was a need, Rhoda was there. Her generosity was endless. She volunteered with IRA and English classes, and she was an informal liaison with the school systems.

Rhoda Segur also brought her skills to the citizenship classes that were sponsored by BIIN and originally held at the facilities of several local churches.  Long-time citizenship instructor Rich Woodward recognized her unique contributions to this program:

Rhoda was there, a constant presence. When she used to help with the citizenship class, she loved the direct interaction with the students but she was also willing to do the hard work to keep us organized. When she saw that we were having trouble keeping our flash cards organized, she brought home all of our flash cards and put a colored and numbered sticker on every card. This dramatically improved our organization in the classroom and is a system that we still use today.

Rhoda’s experiences with language learning and teaching and her genuine interest in others drew her to other opportunities as well.  When the English for Parents program was launched at Neal School, Rhoda participated regularly for several years, delighted to work one on one with parents of school-aged children who wanted to improve their own English.

She could always be counted on to establish rapport with any partner, no matter how reserved they initially seemed, by chatting informally with them about their children and their experiences at school. Generous by nature, Rhoda was also quick to recognize and affirm the efforts of volunteer program leaders.  “What you are doing here is good work,” she would say, whenever she had the chance. In addition to showing up regularly to help with many different BIIN programs, Rhoda made regular donations to BIIN, contributing to the annual fund as a sustaining member and also to special initiatives like the BIIN CARES Fund.  Rhoda Segur was a deep and generous supporter of BIIN, in every possible way.

The skills and sensitivities that Rhoda brought to BIIN’s programs were gifts that she carried everywhere she went, to the benefit of people throughout the community.  Rhoda reached out to people on her own, offered welcome in her home, and inspired others to deepen their own capacity to connect with others, as neighbors and fellow human beings.  Angelita Garcia-Alonzo saw this capacity to welcome others as essential to who Rhoda was:

Rhoda was such a wonderful woman with a servant heart. She truly was the definition of a person who gives of her talents and gifts without EVER thinking what she might receive in return. I will always miss her generosity of heart, her beautiful smile. She was a friend of all.

Mary Lenn Dixon, who helped to found BIIN and served on its board for many years, also knew and witnessed Rhoda in many settings, and described her unique abilities in these ways:

Rhoda Segur was a truly one-of-a-kind beautiful soul. So giving, so dear. I remember two things about Rhoda that are particularly relevant to BIIN, I think.

First, she held conversational partnerships in her own home on Mondays for several years. These represented her commitment to mutuality in our relationships with immigrants. The Spanish-speakers coached English-speakers in their language and vice-versa, around topics of current interest, which meant the language acquisition always had relevance to daily life in B/CS and was always respectful.

Second, Rhoda talked gently about her acculturation to Mexican culture during her years there. She valued the culture highly and thought of herself afterwards as being at least bi-cultural. Sometimes, she said, she thought her cultural identity was more Mexican than American. That made her an amazing ally for people here from other cultures, and a champion for the respect due people who came to our area from elsewhere.

There was never any condescension or patronizing in Rhoda’s language work. She set a model and willingly gave reminders and gentle redirection to those who had not been as privileged as she had to live in a culture she had come to love.

What a gift she was, and what a loss to the B/CS immigrant community.

All of us who work with and support BIIN can look to the example set by Rhoda Segur.  Like Rhoda, we can be prompt to show up and generous in our responses to the needs of vulnerable people.  We can listen to and show genuine respect for others, regardless of the language they speak or the traumas they carry. We can seek mutuality in our relationships with our neighbors and colleagues. Rhoda showed us the way, and we honor her legacy as together we carry on this vital work. 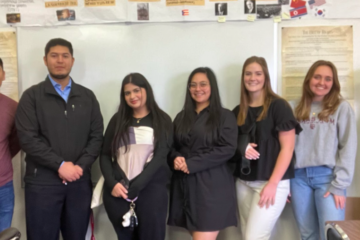 Interns Spring 2023 Lead On From left to right: Freddy, José, Minha, Christian, Grace, Nena, and Alyssa at the Spring Intern Orientation. It’s a new year, and with that comes a new class of interns Read more… 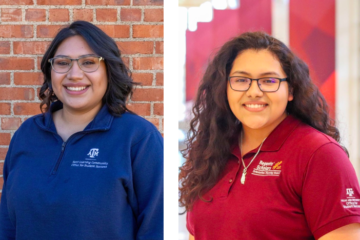 BIIN’s AmeriCorps Members Lead On BIIN has traditionally operated with a small staff, including a rotating cast of unpaid interns, and long relied on volunteers to serve not only on its governing board but also Read more… 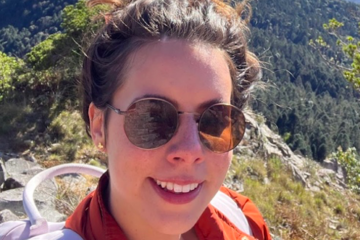 BIINtern sequels:  Gloria McIntush, teaching ESL As her final semester as an undergraduate at Texas A&M drew to a close, Gloria McIntush knew what awaited her:  the many questions from well-meaning family and friends about Read more…